In 2019 and 2020, the Shire was awarded the Crown’s Favor for efforts in support of Meridies and the reigning monarchs.

Award of the Crown’s Favor: given to territorial groups or households in the kingdom who have either served the kingdom directly or set worthy examples of behavior. Recipients may attach to their group’s device a small pennon: Argent, on a pale sable a mullet argent. This award may be received multiple times; each time another mullet is added to the pennon, up to a maximum of five. For each additional award, the mullets are changed one by one to gold.

Our second award was presented at Iris Faire in April of 2019 by King Sebastianos and Queen Morgan.

Our third Crown’s Favor was presented in a virtual court in May this year by King Boru VI and Queen Fianna.

I, Eoin Mac Cana called ‘Clyde’, bear witness to the events that took place on a winter’s eve in the Shire of Easaraigh, Kingdom of Meridies on February 23rd, 2017 Gregorian.

In the winter of A.S. LI, the good Imperator, Barthelemy, did travel in guise to the northern lands of his prosperous kingdom to visit his unsuspecting subjects in Easaraigh.

Earlier in the season, the Mistress of Winter had laid the land low with ice and snow. Through her mischief, the fair Shire of Easaraigh had to suffer the cancellation of well laid plans for a celebration in the Imperators honor. This troubled the Imperator. This ruler is a true caretaker of his flock and desired to meet and share his generosity with all of his land. An Imperators will is not to be tiffled with and this particular Imperator does not cow to the likes of Mother Nature.

His loyal Meridians in Easaraigh had come together to feast in jovial comradarie with the Baron and Baroness of Glaedenfeld and other Baronial guests in celebration of neighborly friendship and to rejoice in the mild weather that had much eased the burdon that the winter season tends to bring upon the land.

As the gathered settled down to their meal, enjoying the flavors and plenty that these types of events bring, the Imperator’s confidant (a certain Master Alexander) did skillfully exit the hall without the slightest notice of those in attendance.

The assembled populace raised their voices in conversation and joy of a shared meal. Suddenly, in the midst of this pleasurable raucous, the booming voice of a well known herald cut though the chorus, “All Rise…”.

Here was Barthelemy, the much beloved liege of the Meridians, standing in the meager mead hall of Easariagh.

The shirefolk, so unaccustomed to the royal presence, fell to silence. Here was their Imperator in all his splendor. Many held their eyes down in reverence to his bright presence (many more made a distinct effort to lift their unhinged jowls back into proper placement).

A pin dropped with a distinct ‘ping’.

Their Excellencies Glaedenfeld, Griffin and Stephanie, rose and assumed positions with the Imperator. Griffin with the sword of state. Stephanie with the Imperator’s sundry basket. Also, there was the clever Master of Stealth Heralds, Master Alexander.

Dumbfoundedness. A royal court in a Shire mead hall? In Easaraigh?

Yes. It was happening.

The good Imperator, Barthelemy, did not only come to surprise the Easaraighains with his most pleasant company and sup with them but, He also came to raise up some of the gentry of this land in recognition for the service the hard working folk of this Shire put forth in the name of their kingdom, Meridies.

A call for the Oath was made and given.

The Imperator greeted the children and the new folks recently moved to the Shire.

He then called Meuric ap Rhys, a local illuminator. Meuric was presented an Award of Arms and a Meridian Cross to boot. Since arriving in Easaraigh from the wastes of the Outlands, Meuric has shown his worth in the production of beautiful illuminations for the Imperator’s scribes for use in the recognition of His subjects.

The attendance rejoiced. A most worthy reward for a deserving man.

With a grin reminiscient of the cats of Cheshire, Marek approached and was presented an Award of Arms. A long overdue award for a loyal citizen and friend of Easaraigh who’s faced many trials to be here.

Next came Lady Medb of the Wolf Dog. ‘..Order of the Argent Comet..’, read Alexander. The Imperator spoke of many petitions from within and without that lauded Medb’s generosity and sharing nature.

Lord Eoin escorted Lady Asa to the front. A Order of the Argent Comet is presented. The Imperator regaled Asa for her communication skills and determined, hard work for her Shire and Kingdom.

Lastly, ‘..Lady Ellen and Lord Eoin..’. Ellen and I met before the Imperator, basking in the royal presence. He spoke of our long service to Easaraigh. We were recognized for our efforts in maintaining his Shire through times of feast and famine. The Imperator saw our loyalty and love of Kingdom. A Grant of Arms was presented to us both.

The Imperator asked for pause and it was given.

He spoke to me directly. He spoke of my writings and how much he enjoyed my insight. He spoke of the inspiration and support they had given him. He spoke of shared ideals and belief being renewed. The Imperator granted me his Sovereign’s Pleasure as ‘Warden of the Northern Plateau’.

Awestruck with elation. I had no words. All was silence in my world for that moment.

The court adjourned and our Imperator joined our revelry with enthusiasm. Many congratulations and appreciations were shared in the hall over drink and delecacies.

Our Imperator shared with his people and it was good.

For my part, I have much happiness for my friends and my wife. I am still filled with euforia as I write this. To be acknowledged be an Imperator in any way is special. It is a big Kingdom and to be brought to His attention (in a good way) is very much a rite that all Meridians treasure.

We in Easaraigh go forward on this day with a renewed vigor thanks to the efforts of a a select few and one most excellent Imperator.

At Menhir yesterday (1/21/2017), The Shire of Easaraigh recieved the Order of the Crown’s Favor from HRMs Barthelemy and Oda. 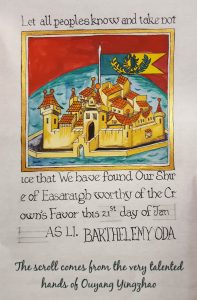 Excerpt from Kingdom Law regarding the Order of the Crowns Favor: