Thank you all for attending this years virtual event, Warden’s Challenge III…Now in HD! We greatly enjoyed sharing knowledge and laughs with you. But alas, it’s time to go. Our success is through your kindness and generous gift of time. Thank you. Thank you. Thank you.

“Parting is such sweet sorrow that I shall say goodnight till it be morrow.”

In 2019 and 2020, the Shire was awarded the Crown’s Favor for efforts in support of Meridies and the reigning monarchs.

Award of the Crown’s Favor: given to territorial groups or households in the kingdom who have either served the kingdom directly or set worthy examples of behavior. Recipients may attach to their group’s device a small pennon: Argent, on a pale sable a mullet argent. This award may be received multiple times; each time another mullet is added to the pennon, up to a maximum of five. For each additional award, the mullets are changed one by one to gold.

Our second award was presented at Iris Faire in April of 2019 by King Sebastianos and Queen Morgan.

Our third Crown’s Favor was presented in a virtual court in May this year by King Boru VI and Queen Fianna.

With the restrictions the current Pandemic, no official in person SCA activities are currently being held.

All it not lost!

The Shire of Easaraigh is still meeting, virtually, via Zoom to share stories, conduct business and socialize.

Until we meet, Godspeed.

Lady Asa held her first live weapons practice today after achieving her live weapons marshal authorization. Much fun was had by all.

Happy New Year! 2019 is upon us and we Easaryfolk are busy as bees, but staying close to the warmth of the hearth as we try to stay dry in the wet winter we are having.

Congratulations to the Kingdoms newest group, the Canton of South Reach in Pulaski, TN. The pulled off an excellent event on the 5th of January that many from Easaraigh had the pleasure to attend.

Godspeed to you and yours.

The Shire of Easaraigh is please to announce our 2018 event ‘The Warden’s Challenge: Wolves at our Door‘! 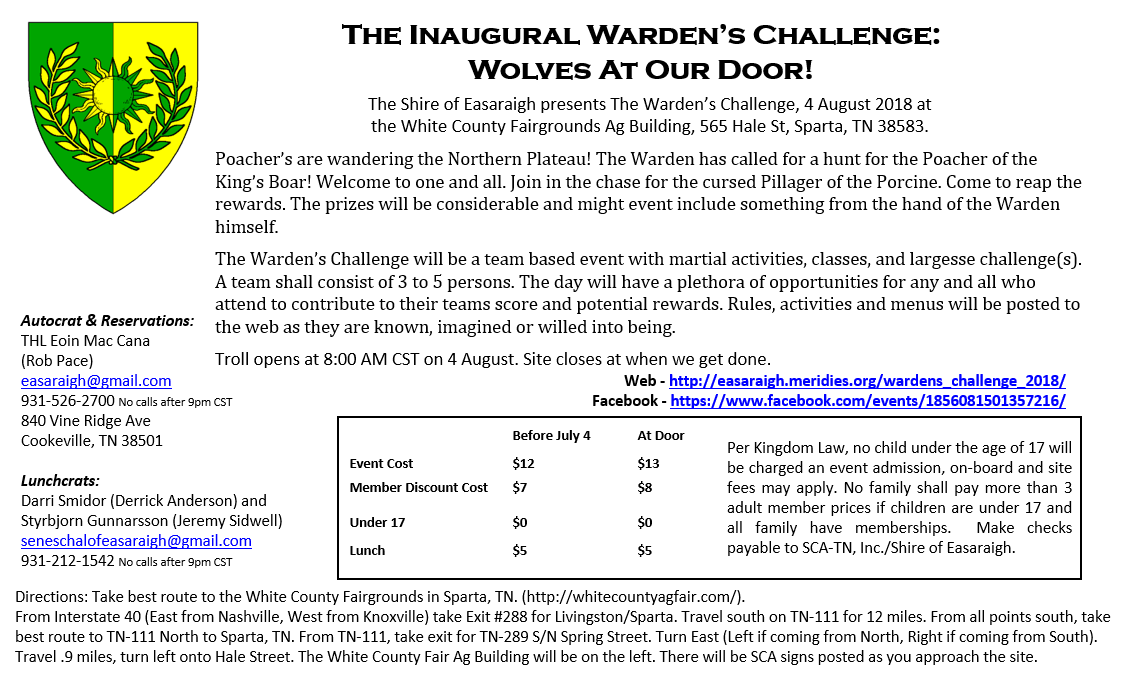 Autumn has passed and Father Winter has settled in for his cold slumber.

It has been an eventful year for the Easaraigh faithful. We have traveled far and wide. We have shared good company at home. We have been humbled by the presence of majesty and rejoiced in the bounty of our hobby.

To everyone, we hope you find a spiced hot beverage (of your choosing), a warm hearth, and  cherished friends and family to share them with.

Border Raids 2017 preparations are underway with the Barony of Glaedenfeld. Information on the event can be found on Facebook and this page.